Posted by Scott DeSapio at 8:27 AM

(Los Angeles, California) - September 23, 2013 - Atlas Distribution Company, LLC announced today that it will be launching an online crowdfunding effort through Kickstarter.com to support the final installment of the Atlas Shrugged movie trilogy: “Who is John Galt?”

“One of the things that’s made Atlas Shrugged withstand the test of time and continue to sell hundreds of thousands of books is just how relevant people find the message of the book to what they’re experiencing today,”  said Producer Harmon Kaslow. 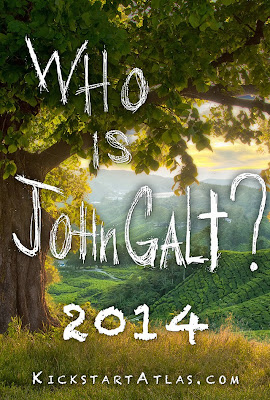 The trilogy follows the three-part structure of Ayn Rand’s epic 1957 novel, Atlas Shrugged. “Who is John Galt?” takes place in a dystopian United States with the nation on the verge of complete economic collapse. While an overreaching government continues to strangle the country’s economic engine, society’s most productive have mysteriously disappeared.

“For years, Atlas Shrugged fans from all walks of life have personally written to me wanting to be involved in supporting the production of the films. Kickstarter provides a clear pathway for fans to now be part of Atlas history,” stated Producer John Aglialoro.

The thirty day Atlas Shrugged Kickstarter campaign offers a wide range of rewards including the opportunity to be an extra in the movie.

“Kickstarter gives us a great opportunity to reach out to a whole new audience as well as afford fans of the book a chance to join us and participate in the making of Atlas Shrugged.” continued Kaslow.

Atlas Shrugged: “Who is John Galt?” is currently in pre-production with filming scheduled for Fall 2013 followed by a USA theatrical release in 2014.

Associate Producer, Scott DeSapio concluded, “Our primary goal is to spread the message of Atlas to as wide an audience as possible. Funds raised through Kickstarter will be going directly towards production and distribution.”

The prior two Atlas Shrugged movies are currently available on DVD & Blu-ray, iTunes, or streaming on Netflix.

Review the full list of rewards and contribute to the Atlas Shrugged Kickstarter campaign now.

Posted by Scott DeSapio at 7:05 AM

It's September 2nd. Start a Conversation.

Is Atlas Shrugged now non-fiction? Stop by the Gulch and tell us.

Posted by Scott DeSapio at 7:53 AM

Email ThisBlogThis!Share to TwitterShare to FacebookShare to Pinterest
Labels: newsletter

Atlas Shrugged Newsletter: 08.29.2013; How Many Bricklayers Did Galt Invite to the Gulch?

This is it. ALL Atlas Shrugged Part 2 gear is now discontinued. Once the inventory is history, it's history.
This is your last chance to own a real piece of the Atlas Shrugged legacy.

Posted by Scott DeSapio at 7:32 AM

Official Francisco d'Anconia Money Clip 15% Off For a Limited Time

There is no symbol that more precisely proclaims the will of the producer than that of the sign of the US dollar.
With a wink and a nod, tell those in the know that you too are the real thing. For a limited time purchase the Francisco d'Anconia money clip at 15% off.


Buy the Official Atlas Shrugged Money Clip now for 15% Off

Posted by Scott DeSapio at 7:27 AM

Posted by Scott DeSapio at 9:30 AM