The movie trilogy follows the three-part structure of Ayn Rand’s epic 1957 novel, ATLAS SHRUGGED. Atlas Shrugged Part 3 takes place in a near future dystopian United States with the nation's economy quickly approaching collapse. While overreaching government regulations persist in strangling the country's few remaining entrepreneurs, society’s most productive continue to mysteriously disappear. One man has the answer. Some will stop at nothing to control him. Others will stop at nothing to save him. Who is John Galt?

The producers have tapped four time Emmy® award-winner, Duncan Scott as the film’s screenwriter along with Brian O’Toole. Long before working on Atlas Shrugged Part 2, Scott worked extensively with Ayn Rand on the restoration and editing of the classic motion picture “We the Living”, based on Rand’s novel of the same title.

“We’re thrilled to have Duncan and Brian back. Having sat shoulder-to-shoulder with Rand, no one else could do what Duncan can when it comes to adapting Atlas. His unmatched experience and his incredible depth of knowledge regarding Atlas are absolutely invaluable,” stated Producer John Aglialoro.

Aglialoro’s company produced and distributed Parts 1 and 2, and has set a USA theatrical release for Part 3 in the Summer of 2014. Parts 1 and 2 are now available on DVD, BluRay and are available for internet download.

Producer Harmon Kaslow said, “Our number one goal with Part 3 is to pull the prescient message of Atlas off of the page and project it clearly onto the screen. Ayn Rand drew incredibly sharp archetypes with stark backdrops. Our goal with Part 3 is to bring these characters to life as accurately as possible and celebrate Rand’s message.”

About Atlas Productions, LLC
Atlas Productions, LLC. was formed by John Aglialoro as a motion picture studio to produce and distribute movies including the trilogy of Ayn Rand’s epic novel, Atlas Shrugged. For more information, visit http://www.AtlasShruggedMovie.com.
Posted by Scott DeSapio at 8:04 AM

Posted by Scott DeSapio at 4:19 PM

Upstate Conservative Coalition is hosting this special showing of Atlas Shrugged Part 2 to provide an opportunity for members, family and friends of UCC to come together and enjoy this movie which most everyone was too busy to see in the theaters in October.

More info available at: http://www.tugg.com/events/2583
Posted by Scott DeSapio at 9:02 AM

"It was as if the centuries had sifted the family's qualities through a fine mesh, had discarded the irrelevant, the inconsequential, the weak, and had let nothing through except pure talent. Francisco could do anything he undertook, he could do it better than anyone else, and he did it without effort."

We are also very excited to finally be able to offer Limited Personalized Editions of the DVD & Blu-ray giving you the opportunity to have your name, or a friends, printed on the disc (e.g. "Special Edition DVD Prepared Exclusively For: [Your Name Here]").

These Special Edition discs will NOT be available in stores and will only be available for purchase online through the Atlas Shrugged web site.


A Special Thank You For The First 1,000 Orders 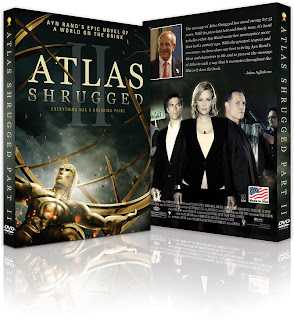 Thank you for an incredible year. We couldn't be more proud or more excited about what lies ahead for Atlas Shrugged.

To express our gratitude for your continued support, the first 1,000 orders will receive a very special gift before December 25th.


"[Thanksgiving] is a producers’ holiday. The lavish meal is a symbol of the fact that abundant consumption is the result and reward of production." - Ayn Rand

Everyday leading up to our HUGE 25%-off-everything Black Friday, the Gulch Store will feature 2 incredible offers...

On Sale Friday
25% off everything in the Gulch Store!

Happy Thanksgiving!
From all of us at Atlas Shrugged, we thank you for your continued support and we wish you all a Happy and healthy Thanksgiving!


Hot in Galt's Gulch Online This Week
Hostess Shrugged - posted by overmanwarrior
No more Twinkies. No more Ho Ho’s. No more Wonder Bread. No more Ding Dongs. Member ObjectivistAnalyst asks "When will the Unions and the Politicians learn that Economics trump their perceived power?"

Read more in the Gulch now.


Don't Forget the Book!
When was the last time you gave someone Atlas Shrugged? This year, let's make sure everyone gets the one gift that really keeps on giving - knowledge.

Buy Atlas Shrugged the Book Now.
Posted by Scott DeSapio at 11:09 AM