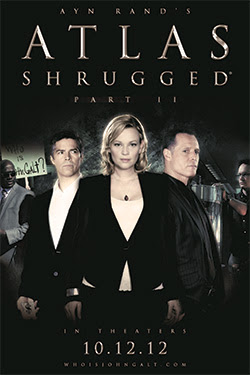 “Russell and Bill bring incredible experience and success with well-known book adaptations, and we’re excited to have them bring their expertise to the Atlas Shrugged marketing and distribution team,” said John Aglialoro, chairman of Atlas and producer of the Atlas Shrugged films.

“The themes of Atlas Shrugged are as relevant today as they were when Ayn Rand had her book published in 1957,” said Harmon Kaslow, CEO of Atlas and Aglialoro’s producing partner. “We wouldn’t be here without the support of the millions inspired and influenced by the book - from those that picked up Atlas in their college days to the incredible Tea Party support we’ve received, the message of Atlas continues to resonate. We have every intention of making Atlas Shrugged part of the discussion this election season.”

Schwartz is currently the president of Pandemic Marketing, a firm with experience developing marketing solutions for a wide range of film industry clients, including MGM, National Geographic, 2929 Productions, Miramax and others. Schwartz was previously president of domestic marketing for New Line Cinema, where he created and managed theatrical marketing campaigns for more than 60 films, including The Lord of the Rings trilogy, Hairspray, Austin Powers, Elf, Wedding Crashers and more. Schwartz has served as president of USA Films and Gramercy Pictures and executive vice president of Miramax Films.

Atlas Shrugged Part II – Either-Or leads off with the global economy on the brink of collapse. Unemployment is 24%. Gas is $42 per gallon. Meanwhile, brilliant creators, from artists to industrialists, continue to mysteriously disappear at the hands of the unknown. Dagny Taggart, Vice President in Charge of Operations for Taggart Transcontinental, has discovered what may very well be the answer to a mounting energy crisis - found abandoned amongst the ruins of a once productive factory - a revolutionary motor that could seemingly power the World. But, the motor is dead... there is no one left to decipher its secret... and, someone is watching. It's a race against the clock to find the inventor before the motor of the World is stopped for good.

The official website for the motion picture is http://www.AtlasShruggedMovie.com.
Posted by Scott DeSapio at 1:00 PM