Our friends at Americans for Prosperity have invited us to take part in their upcoming Defending the American Dream Summit event at The Washington Hilton in Washington D.C., Saturday, August 4th 2012.

We're looking for a few volunteers to join us and help hand out t-shirts and posters. You may even run into one or two of the Producers of the upcoming Atlas Shrugged Part 2 movie...

Come on out and join us for what is sure to be a fun day.

WHAT?
Americans for Prosperity "Defending the American Dream Summit"

IMPORTANT: There will be some moderate box lifting and it's probably going to be pretty hot so you must be in good physical health. You must provide your own transportation. You will not be monetarily compensated.

Not everyone that signs up to volunteer will be asked to join us at Saturday's event. If you are selected to attend, you will be notified with instructions by Friday August 3rd.

Sign up to be an Atlas Shrugged volunteer now.
Posted by Scott DeSapio at 8:45 AM

Atlas Shrugged Part 1 was recently nominated for "BEST DVD RELEASE" in the 38th Annual Saturn Awards. Join us at the event and sit shoulder to shoulder with screenwriters Duncan Scott and Brian O'Toole. 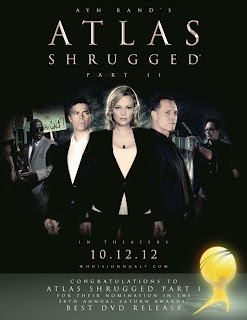 So, how do you get there? All you need to do is share Atlas Shrugged Movie facebook and twitter posts. One contestant will win $1000, to put towards travel and lodging, and up to 4 tickets to the event.

What?
The 38th Annual Saturn Awards

How?
Enter to win by sharing any Atlas Shrugged Movie facebook and/or twitter post. Each share counts as a single entry. You can share/enter as many times as you like. The winner will be determined by random drawing Wednesday, July 25th and announced on facebook at http://facebook.com/atlasshruggedmovie at approximately 5:00 PM EST.

1. HOW TO ENTER
a. These rules govern Atlas Shrugged "24 HOUR CONTEST" July 25th Drawing' ("Promotion") by Atlas Productions, LLC. (the "Producer") beginning on 12:00AM PT on Tuesday July 24th, 2012, ending on 5:00 PM EST Wednesday July 25th, 2012.
b. To participate in the Promotion, you must share Atlas Shrugged Movie facebook and/or twitter posts on or before 5:00 PM PT, Wednesday, July 25th, 2011. The selected participant will be required to provide all information requested by Producer including their full name, complete address (including zip code), day and evening phone numbers and date of birth in order to be eligible to win the Promotion. In the event that the selected subscriber is found to be ineligible, the Producer will randomly select another subscriber until an eligible subscriber is selected. There will be up to a total of two (2) subscribers selected during the Promotion dates. The Producer is not responsible for internet access outages, delays, data corruption, equipment malfunctions and any other technological difficulties that may prevent an individual from participating.

2. ELIGIBILITY RESTRICTIONS
a. The Promotion is open to all persons who are 18 years of age or older and who reside in the USA. This Promotion is subject to all applicable federal, state and local laws and regulations and is void where prohibited.
b. The winner must provide valid government-issued photo identification and provide their complete address, social security card, date of birth and phone number to claim a prize.
c. Entrants are required to provide truthful information and the Producer will reject and delete any entry that it discovers to be false or fraudulent. The Producer will disqualify any entry from individuals who do not meet the eligibility requirements. The Producer will also delete any entry knowingly received from persons under the age of 13 in compliance with the Children's Online Privacy Protection Act.

3. PRIZE
a. One prize will be awarded in this promotion. The prize includes: $1000.00 and up to 4 tickets to the Saturn Awards held on Thursday July 26th, 2012. Producer reserves the right to modify or cancel this promotion without notice. Not responsible for errors or omissions.
b. There is no substitution, transfer or cash equivalent for prizes, except that the Producer may, at its sole discretion, substitute the prize with other Atlas Shrugged merchandise. The prizes are expressly limited to the item(s) listed above and unless otherwise expressly specified, do not include taxes, gratuities or any other expenses. Other restrictions may apply.

4. WINNER SELECTION AND NOTIFICATION
a. Decisions of the Producer with respect to the Promotion are final.
b. "Odds of winning a Qualifying Prize depends upon the number of shares/posts."
c. The winner must execute and return any required affidavit of eligibility and/or liability/publicity release within ten (10) days of winning or prize will be forfeited.
d. If a potential winner cannot be contacted, fails to sign and return the required affidavit of eligibility and/or liability/publicity release within the required time period, or if a prize or prize notification is returned as undeliverable, the potential winner forfeits the prize.

5. CONDITIONS
a. Payments of all federal, state and local taxes are solely the responsibility of the winner.
b. By participating in the Promotion, the winner agrees to have the winner's name, voice and likeness used in any advertising or broadcasting material relating to the Promotion without additional financial or other compensation, and, where legal, to sign a publicity release confirming such consent prior to acceptance of the prize.
c. Prior to awarding any prize or prize certificate, the Producer, in its sole discretion, may require Promotion winner to sign a liability release, agreeing to release and hold harmless the Producer, its licensee, the licensee's parent, subsidiary and affiliated entities, their respective officers, shareholders, directors, employees, agents and representatives and all of their successors and assigns from and against any and all claims or liability arising directly or indirectly from the prize and participation in the Promotion.
d. If for any reason this Promotion cannot be executed as planned, including, but not limited to, as a result of infection by computer virus, tampering, unauthorized intervention, fraud, technical failures, or any other causes beyond the control of the Producer that corrupt or affect the security, administration, fairness, integrity or proper conduct of the Promotion, or if the Promotion is compromised or becomes technically corrupted in any way, electronically or otherwise, the Producer reserves the right to cancel, terminate or modify the Promotion. If the Promotion is terminated before the original end date, the Producer will select the winners by random drawing from among all eligible non-suspect entries received as of the termination time/date.
e. The Producer, in its sole discretion, reserves the right to disqualify any person tampering with the entry process or the operation of the Producer's website. Failure to comply with the rules of the Promotion may result in a contestant's disqualification and/or forfeiture of any prize or prizes. If the Producer makes a good faith determination that an entrant has cheated or committed fraudulent activity in connection with a Promotion, the Producer reserves the right to disqualify that entrant from entering and/or winning future Promotions and to prosecute and seek damages to the fullest extent permitted by law.
f. The Producer reserves the right to make changes in the rules of the Promotion, including, without limitation, the substitution of a prize of equivalent value, which will become effective upon announcement. If due to circumstances beyond the control of the Producer, the prize-related event is delayed, rescheduled, postponed or cancelled, the Producer reserves the right, but not the obligation, to cancel or modify the Promotion and shall not be required to award a substitute prize.
g. The Producer is not responsible for typographical or other errors in the printing, the offering or the administration of the Promotion or in the announcement of a prize.

For the name of the prize winners send a self-addressed stamped envelope prior to July 26th, 2012 to the above address marked "Atlas Shrugged '24 HOUR CONTEST' July 25th Drawing - Winner." The Official Rules and the Winner List (when completed) shall also be available during regular business hours at the main offices of the Producer and shall be posted online at www.AtlasShruggedMovie.com.

These contest rules may be amended during the course of this contest. Please check back regularly for updates.
Posted by Scott DeSapio at 10:10 AM

Our friends at FreedomWorks have invited us to take part in their upcoming "FreePac" event at the American Airlines Center in Dallas, TX, Thursday, July 26th 2012.

We're looking for a few volunteers to join us and help hand out t-shirts and posters. You may even run into one or two of the Producers and/or Stars of the upcoming Atlas Shrugged Part 2 movie...

Come on out and join us for what is sure to be a fun day.

IMPORTANT: There will be some moderate box lifting and it's probably going to be pretty hot so you must be in good physical health. You must provide your own transportation. You will not be monetarily compensated.

Sign up to be an Atlas Shrugged volunteer now.
Posted by Scott DeSapio at 8:12 AM