Scene pulled directly from film to be released on Presidents Day 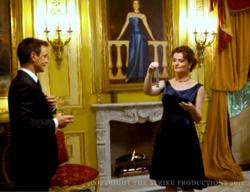 Culver City, CA (Vocus/PRWEB) February 18, 2011 - Today, “The Strike” Productions, Inc. announced the release of an unseen clip from the upcoming Atlas Shrugged movie. The full scene, pulled directly from the film, is to be available on the movie’s YouTube channel at 9 am EST on Presidents Day, Monday February 21, 2011.

“We’re sure our fans will appreciate our response to the vigorous online debate over the film,” said Kaslow in reference to the large number of comments resulting from the +650,000 views of the YouTube hosted trailer.

Kaslow continued, “We want the fans of the book to know we appreciate their passion and excitement about the movie.”

“Audiences will find that the direction, writing, performance, and production design embody an accurate and contemporary depiction of Ayn Rand’s original scene from the novel. Ayn's courageous dialog finally shines bright on the silver screen.” according to Kaslow.

The clip is to be released on the film’s official YouTube channel, http://YouTube.com/user/AtlasShruggedPart1 as well as the movie’s official site: http://www.atlasshruggedpart1.com.