Error on Atlas Shrugged DVD and Blu-Ray slips through cracks, ends up on retail shelves.

The 1957 novel, Atlas Shrugged, is known in philosophical and political circles for presenting a cogent argument advocating a society driven by rational self-interest. On the back of the film's retail DVD and Blu-ray however, the movie’s synopsis contradictorily states “AYN RAND’s timeless novel of courage and self-sacrifice comes to life...” 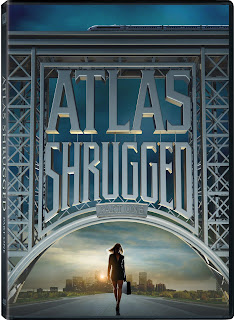 “It’s embarrassing for sure and of course, regardless of how or why it happened, we’re all feeling responsible right now.” says Scott DeSapio, Atlas Productions’ COO and Communications Director “You can imagine how mortified we all were when we saw the DVD but, it was simply too late - the product was already on shelves all over the Country. It was certainly no surprise when the incredulous emails ensued. The irony is inescapable.”

DeSapio continued “Ultimately, the responsibility falls on us, Atlas Productions. We are putting policies in place now to ensure we avoid these types of unforced errors in the future.”

Harmon Kaslow, CEO of Atlas Productions and Producer of the film stated “As we all well know, the ideas brought to life in Atlas Shrugged are entirely antithetical to the idea of ‘self-sacrifice’ as a virtue. Atlas is quite literally a story about the dangers of self-sacrifice. The error was an unfortunate one and fans of Ayn Rand and Atlas have every right to be upset... and we have every intention of making it right.”

John Aglialoro, Chairman and owner of Atlas Productions stated, “We needed to quickly correct this mistake and I’m pleased we did.”

Kaslow added, “To those that purchased the flawed cover, congratulations are in order. You’ve inadvertently got yourself a real collector’s item there."

Atlas Productions has setup a web page for consumers of the DVD to request a replacement title sheet free of charge: http://www.AtlasShruggedMovie.com/title-sheet. The new title sheet will more accurately read “AYN RAND’s timeless novel of rational self-interest comes to life...”

Rand’s 1,100 page bestselling book is being produced by Atlas Productions as a trilogy which follows the three part structure of the novel. Part 1 was released theatrically in USA on April 15, 2011. Part 2 is expected to follow in 2012.

About Atlas Productions: Atlas Productions, LLC. was formed by John Aglialoro as a motion picture studio to produce and distribute films including those based on Ayn Rand’s epic novel, Atlas Shrugged. For more information, visit http://www.AtlasShruggedMovie.com.

Posted by Scott DeSapio at 8:02 AM